The motorcycling season is finally starting to come to end for everyone that lives in seasonally temperate zones, and those of us that live at the base of gigantic mountain ranges. This means that its time to hang up the keys, winterize our rides, and sit around being irritated as all that lovely snow quietly falls around us. Losing the ability to ride off into the sunset or blast through the mountains whenever needed for a mental break can really bring a motorcyclist down during these months.

While the sleet and snow may be keeping us off two wheels, deranged mad scientist mechanics are still making the most of these months of down time, wrenching poorly on bikes with cartoonish dollar signs where their eyes should be. Throughout the winter, these failed engineers continue to piece together hideous looking Hayabusa motorcycles in garages across the country with hopes of scoring big bucks from folks with less taste than brain cells.

No matter what the weather is like outside, shit rolling downhill is always in season.

This lovely article is the 4th installment of my “Ugly Hayabusas” feature, and if you are new here, be sure to check out Part 1, Part 2, and Part 3 and watch how I get lazier and lazier with each pitiful attempt at trying to lay down an introduction. Basically, what I do is scour eBay and Denver craigslist to expose the ugliest and saddest examples of modified Suzuki Hayabusas for sale, usually priced at laughably exorbitant prices. Why do I have such an obsession with uncovering anomalies of this particular make and model of bike? For some reason, people selling their personal dream bikes that really only appeal to themselves after years of putting serious cash into stupid modifications is uncontrollably fucking hilarious to me.

For example, here’s an actual update to one of the lovely entries from THE FIRST EDITION (posted in APRIL of this year!!):

6 months ago, this tag team of garbage bikes was being sold at the same time from the same crazy person who owned a “personal dealership” full nothing but salvage titled luxury vehicles because he’s a discount baller. This auction ended not actually selling, so if you love shitty tribal flames on a busted-ass bike, this pastel beauty is still available on eBay. Be sure to bring your own shovel.

Now, it might seem that I hate all of these bikes and motorcycling in general, that is most definitely not the case. I love almost anything on two wheels, and I love riding. (preferably as far away from you assholes with gigantic SUVs and cell phones you can’t seem to stop jerking off). I even think that Hayabusas are actually pretty rad looking bikes when left unmolested. While scouring the internet for Part 4, I even found an eBay ‘Busa during this last go-round that I positively LOVED, and was considering trying to figure out a way to raise the $17,000 needed to pick this monster up.

That’s an example of what makes a bike pretty in my eyes. There’s clearly a lack of stupid modifications, clean, dazzling, TASTEFUL paintwork and the bike still retains most of its intended shape. The blue on white vinyl/paint highlights sparkle and shine in the sunlight, and make this bike look like a giant tropical wave traveling down the highway at 168 MPH.

The bikes on the following list choose to blaze their own path. Mostly a path down a hill covered in razor blades and dirty needles, landing directly into rat-infested outhouse overflowing with feces. Are you exited yet? Are your vaccinations up to date?

Get your checkbook, and let’s get this shit over with already. 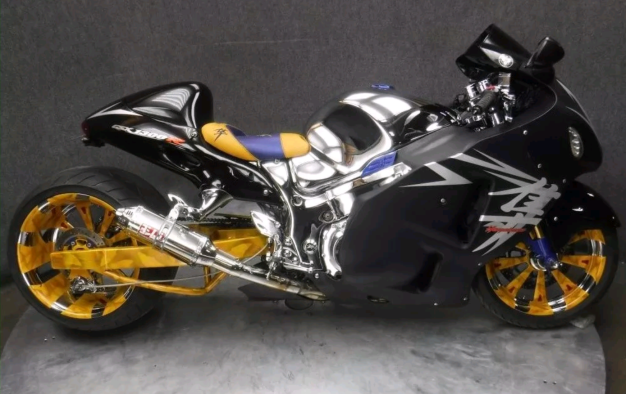 Sometimes, when you begin a big project, you might not have a clear picture of what you are trying to accomplish or even know what your end goal is supposed to be. You might run out of funding or even lose the garage/workshop space in which to craft your dream bike. You might even give up and stop wasting time with it, moving on to more important work like collecting Precious Moments figurines.

Or, like this bike, your failure could be the result of a combination of all of these reasons.

This Hayabusa is a mismatched mess with plenty of baby-shit yellow painted parts. The tank and sub frame are chromed, the nose fairings are matte painted black, and the rest is either yellow or polished black. Then after all that was done, they sprinkled some purple around randomly for the sheer fuck of it. This motorcycle looks like something Tony Stark would build if he was trapped in a cave and was forced at gunpoint to build a time machine using nothing but used condoms and old Barnyard Commandos toys.

Something Nice About this Bike:

At least you never have to worry about it ever getting stolen.

What we have here is the complete opposite of The Cobbler. This bike is too unified in theme to be considered appealing to the eye. Almost every square inch of this ride is the same weird swirly blue pattern, including the turn signals. The underlying paint under all 34 layers of clearcoat almost has a weird Alien/H.R. Geiger quality to it, except that these terrifying aliens from our collective nightmares are portrayed in baby blue.

This could have almost been passable, but having the seat, windshield and lights painted exactly the same kills the “machine” quality of this bike, and looks more like a failed attempt at building a plastic model after mistakenly buying a single can of spray paint. I cannot fathom why they didn’t paint the frame with the same stupid scheme, because they certainly didn’t bother masking anything else off.

Something Nice About this Bike:

At least the frame sliders will protect the integrity of those Hot Topic spiked fairing bolts in the event of a crash, protecting your rep at the mall.

This is pretty much the exact same bike/paint scheme as the Mr. COOL Ice bike, except that it is done in red and has a slightly more variance in the color scheme. Not sure why they decided to paint this bike up like an infected butthole.

Something Nice About This Bike:

The illuminated stator would be bitchin’ for illuminating my Game Boy.. 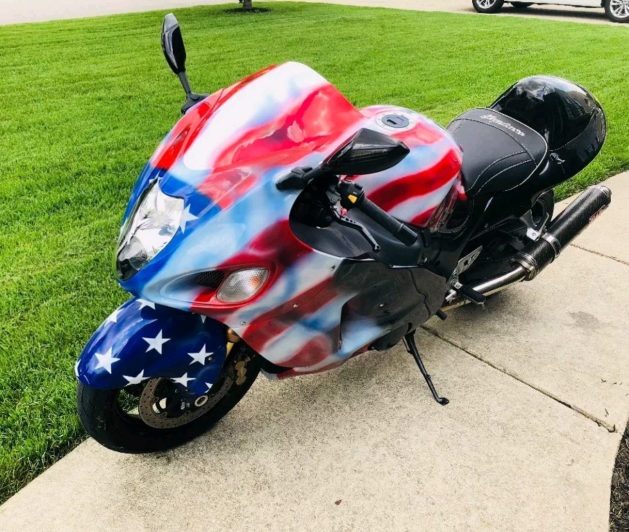 Once again, yet another God-fearin’ defender of the Constitution has spent months and hundreds of dollars getting that t-shirt guy from the state fair to airbrush his bike into a giant American flag, for nothing more than great justice. Every time this bike starts up, a bald eagle cries awakes and flies upwards triumphantly toward the horizon, clutching at least eight AR-15’s and a bucketful of McDonald’s in its talons.

This bike has the strength to instantly repel anything that is remotely un-American, and is currently parked on the US/Mexico border to repel the incoming horde of starving women and children seeking asylum. Sadly, this bike is actually more functional than “the wall” that is still yet to be built/funded/designed directly from Acme blueprints. Make Mexico pay for the bike!

Show off your patriotism and nationalism by purchasing this incredible ride today (purchase by women/minorities/brown people/LGBTQ/native Americans not applicable)!!

Dumb paint with stock black mirrors on the white stripes that represent the freedom area of the bike, reversed direction muffler/exhaust, a pocket Constitution where the owner’s registration and insurance info should be, because freedom isn’t free, and paying your fair share is a government conspiracy that goes deeper than chemtrails.

Something Nice About This Bike:

If you wear a sweet-ass American flag tank top while cruising around on this thing, you are guaranteed to totally get laid (as long as your destination is your family reunion).

Sometimes, all you want is for your bike to stand out in a crowd, but you might not be sure how to go about achieving it. Sometimes, just throwing down some serious cash for a flashy paint job is all you really need.

Owner: “I want something neat, but I don’t have any ideas”

Painter: “Ok, I guess I can just throw all of that shit at the wall and see what sticks. I’ll call you back in a month”.

Once this owner got his magnificent motorbike back, he then attempted to craft a backstory about why his bike looks like the side of a 1970’s panel van having a seizure. His medieval backstory tale, is set in a darkness-filled realm of screaming skulls and floating dice, is the story of two poorly drawn ladies who are searching for their clothing. It was not a very popular thread on Reddit.

What’s Nice About this Bike:

If you’ve ever wanted to ride around town on a used Trapper Keeper, here’s your chance.

This is a screenshot of the actual craigslist description for one of the dumbest Hayabusas I have ever come across. With this bike, there’s a new element thrown into the mix of stupidity. There’s no false patriotism, alien graphics or screaming skulls to be found, anywhere. This motorcycle historically encapsulates the EPIC brutality of the never-ending battle between heaven and hell….

…..if both heaven and hell was populated by nothing but winged stick figures!

This thing looks like what would happen if the guy that drew Dilbert was commissioned to paint the cover of a Zeppelin album. The photo above is the “hell” side, where lobsters that live inside Castle Grayskull attack the heels of heaven’s greatest warriors. Or possibly these guys are supposed to be hell’s greatest warriors, it’s really hard to tell what the fuck is going on here, and there’s nothing but shitloads of naked dudes all over the place.

And here we have the “heaven” side, which is nothing but test tubes, feathers, and beefcake angels lounging around looking bored. This is the side of the bike that captures the real spirit of a most epic battle. There is clearly more attempt at narrative going on over this bike than there is available paintable real estate, so maybe this guy should have just stuck to painting the backside views of dudes wearing bikinis.

A Positive Thing About this Bike:

Not many people can say that they purchased a living masterpiece of art for only $27,000. It’s still available for purchase, and you can actually be that guy, having the angels battle to the death by your crotch for the rest of eternity. Or this guy will trade it straight across for a $6,000 KTM Super Duke.

Teh Ben is a writer, philosopher, and actor. Once all those lawsuits from PBS are finally resolved, he promises to re-upload those videos of him beating the shit out of Blippi at Wal-Mart again.