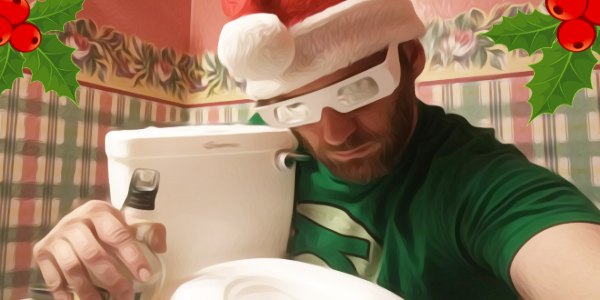 Just like that, (record scratch) another year has ended up behind us! For the most part, all of us are a little bit smarter, possibly a little fatter and likely several steps closer towards our livers completely quitting on us. Whenever the snow starts falling and the eggnog brings out the dancing pink elephants, we chose to celebrate surviving the length of another year by buying each other gifts. This yearly ritual also includes having to also get presents for people we don’t care that much for.

Don’t hate the player, hate the game! Here is your handy guide to give you great ideas for lousy/crappy gifts for all those lousy/crappy people.

On the surface, the simple joke on the face of this shirt is pretty fucking great. In a much broader meta sense, the shirt itself is 20 bucks, which really makes you wonder how it was purchased by the guy wearing it. The idea that this guy clothes himself in joke t-shirts by blowing dudes makes me grin from ear to ear.

Some may think this joke might just be a one trick pony, but having to wear it in public in different situations is where this gift really shines.

Wearing it to a classy restaurant like Applebee’s – You’re gonna be uncomfortable.

Wearing it while gambling/at the bar – You’re gonna be uncomfortable.

Wearing it while at a urinal in a public restroom – You’re gonna be reeeal uncomfortable.

That’s a lot of mileage for such a dumbass present.

Nothing says “Merry Christmas…. you weird son of a bitch” quite like giving somebody special a demo cartridge made by Mattel back in the early eighties touting the amazing computing power of the Intellivision. They manufactured these by the truckload in order to make the Atari 2600 (that it was competing against) look like absolute shit. These were actually pretty impressive for the time, showcasing a looping three minute demo of text and games set to a chiptune version of 2001: A Space Odyssey. Really!

These carts were handed out for free with every retail purchase of Intellivision software and I remember having at least ten of these fucking things in the house as a kid. Every third game you would grab out of the pile was always a copy of Intellivision Demonstration Cartridge missing its label, and I would be so pissed that it wasn’t The Power Of He-Man.

FUN GIFT FACT: There is a 99.76% chance they won’t have a system to play this stupid thing on anyways.

BONUS GIFT IDEA : If gifting people obscure video game peripherals is your thing, nothing can drop jaws harder than giving somebody a bright orange light gun for a Panasonic 3DO. (contact author for sale details)

I’m sure there are a few big sports fans in your life, and I bet they would love some genuine sports memorabilia featuring famous athletic heroes from years gone by, but let’s face facts, that shit’s expensive.

Miraculously, Blair Walsh is somehow still actively working in the NFL despite having been the sole reason for at least two different teams losing multiple games in the final seconds. He’s also exceptionally good at fucking up your fantasy scores too.

This is a simply horrible gift that you should consider giving to your favorite writer/blogger/YouTube star/podcaster/studio musician. I know for a fact that he would absolutely hate it. I embedded his amazon wish list info in a secret line of code in this article, and you can buy him one if you are truly feeling diabolical. He would really be miserable playing a HD console that has both Starfox 2 and Super Mario RPG on it. You can be the person who shitsmas on his Christmas!

If you thought the ICP album from last year’s list was bad, then you should get those earplugs ready! This tribal tattoo covered CD is packed with 13 of your favorite 90’s soft-rockin’ quasi-religious radio hits on ONE SINGLE DISC! What If I was Torn, With Arms Wide Open in My Own Prison pondering What’s This Life For, anyways? I’d be Throwing Copper, that’s for sure…wait…I think that was from some other shitty 90’s-sleep-rock band, my bad.  Creed was a band that was so embarrassing to most Christians, they made DC Talk look legit.

Remember kids, even Jesus is embarrassed that Creed ever happened.

5. Blu-Ray Copy of The Emoji Movie

Regrettably, I stepped out to do some shopping at a big box discount store on Black Friday, and it went about as well as it could be expected with my well-documented short temper. I know everyone who willingly goes out and does this is already spread pretty thin on the whole “humanity” thing, but I just can’t avoid poking a bear with a stick whenever the opportunity presents itself.

As I stood in one of the two open checkout lanes that stretched back to Kansas, I decided to unleash my bad mood on the poor soul behind me.

“Oooooh! The Emoji Movie!” I said.

“Yeah, can you believe it? It was the last copy on the rack!”

“Wow. Your kid must have done something REALLY bad, huh?”

There are awful movies out there, and then there are “films” like The Emoji Movie, where they wrote a screenplay by throwing endless handfuls of cash at a drunken five year old. This movie is proof that only having a massive budget and nothing else does not guarantee success. The only way this film could be any worse is if it was packed together as a double feature with Monster Trucks and some thick custodial gloves.

This is an awesome gift idea that requires a little preparation beforehand, and works even better if you have a shrink-wrapping machine sitting around at home. First, buy a copy of the slasher/horror flick Jack Frost and a copy of the heartwarming family dead dad movie Jack Frost. Switch the two discs with the cases and then make an important decision of what two unlucky people you want to redistribute them to.

Person 1: Gets the happy, feel-good family-friendly case. Sits down with the whole family and gets a movie that revolves around a possessed snowman brutally murdering everyone and committing bathtub rape with his icicle dick. It’s a surefire hit with kids!

Person 2: Horror movie fan gets the scary case, puts it in and instead gets a sickly sweet family drama starring Michael Keaton, which is probably worse, in all honesty.

No matter what, everyone loses!

(PEASE NOTE: I don’t approve of the gay shaming stuff, because that’s not funny)

But what IS funny is a giant magnetic bumper sticker that says “I PUT HAMSTERS IN MY BUTT”. I want that shit on my own car! If I get to pick which ones I get from the seller, I would focus on the great ones like “I HEART CRACK WHORE#”,”I BANG MY COUSIN”, and “SEX EFFENDER”. This fucking guy didn’t bother spellcheck a single one of these, which adds a personal touch to his uniquely spiteful charm.

These would be not so much a gift for others under the Christmas tree as they would be gifts given to the backs of random asshole’s vehicles throughout the next year as they piss me off on the highway. I can’t wait to slap one that says “LADIES LUV MY MICROPENIS” on the bumper of the next stupid giant truck that rolls a giant cloud of black coal smoke on me and my motorbike. Deep down, I think that retribution like this something we can all agree is deserved, and labeling these douchebags is a public service to everybody else on the road.

I get it. You firmly believe that the clouds will part and all the coal mines are going to all magically open back up and we are going to scrap those silly wind farms. You believe that the world’s richest people (thanks to that hard-earned inheritance) shouldn’t be taxed. You believe this great nation can ever go wrong as long as old white rich people are kept in charge of the cogs of this great machine we call “America”.

Fear not, my fellow MAGAmerican! Never, ever be afraid to wear your beliefs on your sleeve, and with this hat, you can display them proudly on your misshapen head as well.

Now your progeny can get a feeling for what it’s like to have the exact same work load as the most important person in the universe! The Presidential Mar-A-Lago Playset comes with several different golfing clubs and a few sheets of paper with important looking letterhead printed on them. To get the most realism out of this toy, have your child shuffle papers around for less than twenty seconds and then spend the next four days golfing and sending angry tweets with the autocorrect turned off. It may not the hardest job, but somebody has got to be conditioned to do it. Your kid may very well become the next President of the United States!

Happy holidays, stay warm and safe, and I hoist a fuzzy warm alcoholic beverage to you! Cheers!