Halloween is speeding towards a fast conclusion, and we have only a few haunting days left before the big chain stores slap discounts the plastic skeletons and roll out the light-up plastic biblical figures. Even motorcycle season is coming to a rather abrupt end. You know that it’s over when every time you ride, you have to start jamming one of those hand warmer things in your underwear to keep you from feeling like you got punched in the dick by Johnny from Cobra Kai.

In retrospect, I wish I could have gotten a little more content released this month, but I’ve had a really hard time getting motivated to create anything. I don’t know what is going on, but my Halloween Spirit has been swirling around the shitter. Normally, every Halloween I get pumped up kicks because I still dress up with my kids and go trick or treating with them. I even planned on making a decently elaborate cosplay Old Greg costume, complete with a 5k lumen LED mangina.

I was overly excited to be everyone’s favorite scaly man-fish for Halloween. I brushed up on my Old Greg mannerisms and quotes, and emptied several prop bottles of Bailey’s, but I just lost the fire to make this costume after I could not locate a seaweed looking enough green wig.

In frustration, I definitely called it in this year, and sadly, I am going door to door wearing a $2 dollar fallout/gas mask while wearing a Make America Great Again T-Shirt.

I’m such a sell-out.

But growing up, I never had to worry about shopping for a costume, and I’m grateful I never had to settle for a crappy Ben Cooper costume for Halloween. You remember those soulless things, right? They were the creepy cheap plastic mask with a rubber string that attached it to your head, and you wore a printed haircut smock made out of plastic thinner than they stuff they use for making grocery bags. They were fucking awful, and nothing says “Halloween FUN” more fun than being both mostly blind and so flammable that they were known to spontaneously combust.

Even though these “costumes” were genuinely licensed from their copyright owners, they were still hobo as all fuck. I know that most kids in my class went with these strictly for the pop culture appeal, but I never had to worry about wearing one of these because I had a secret weapon that they didn’t.

…..my mom, the greatest seamstress I’ve ever known. Even though having to have our costumes sewn limited our ability to have “licensed” character costumes, it was a blessing in disguise because it gave my siblings and I the ability to stand out in a sea of dead-eyed He-Mans and Leatherface-esque Wonder Women.

There were other positives to this approach too, like getting to have complete control of the whole costume. You got to pick the colors, the fabric types, and got to have them tailored specifically to our bodies that grew in weird proportions as kids. They were also sewn by hands not trapped inside a sweatshop, and could actually hold up for years after being relegated to the coveted “costume box”. Last year I bought a mass produced Sub Zero costume that managed to stay together for one night and one YouTube video before disintegrating as I twerked.

So a few weeks ago, I went through all my old photos with a bottle of whiskey and found pictures of all my Halloween costumes from years prior, crafted with love by my mom, and I thought I’d share them with you.

It was the beginning of the 80’s and I wanted to be a leopard after seeing one on Mutual of Omaha’s Wild Kingdom one morning. Here I am prowling the stairs that would later give me PTSD from being chased up them relentlessly by the Lobsterman, a creature that would materialize downstairs once I realized I was alone and it that it was suddenly…too quiet.

Here I am again, a year older and a year wiser, wearing the same thing. I don’t know why I thought that leopards wore lipstick and blush. I’m sure this costume held together for more than a decade, which is a testament to my mom’s hardcore sewing ability. 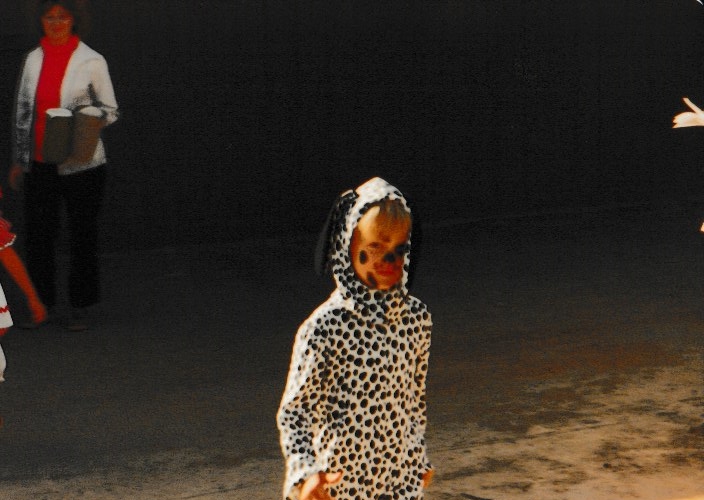 We stuck with the animal theme again, but this time I decided to go with a fireman’s best friend. This was years before they figured out all that purebred inbreeding made dalmatians severely stupid and insane, but in this picture, it looks like I was on to it already. Note my shitty scowl. I don’t know what my fucking problem is.

This Irish Drinking Care Bear was one of the most labor intensive costume my mom ever made. It was an absolutely insane build, the stupid thing had frame built inside the head to support itself. I remember this one taking my mom a couple of months to complete, and I’m pretty sure it ended up being pretty expensive when you figure in both material cost and labor hours. After Halloween 1985, this one got put in a suit bag and only got loaned to other kids after they signed a rental agreement

I don’t have a picture of this one, and that sucks because it was my favorite costume that my mom made for me. It was on par with an expensive cosplay Vader suit, complete with pleated everything, breathing controls, comm boxes and buttons. It was fucking bad ass, trust me.

1988- The Creepy Wizard and the Pizza Guy

Ninja Gaiden was a hot hot property on the NES in 1989, and even though I was terrible at playing the game, I just wanted to pretend I was the stoic ninja in the cutscenes. I also decided to be extra ninja by wearing white fucking socks with this costume.

One of my most vivid Halloween memories was this year. In ’89, we had a blizzard on Halloween night, and I still decided to run out into the night alone to trick or treat by myself. I was frozen, but damn if I didn’t feel like I was in level 2-2 having to jump in time with the wind and blowing snow (to the tune of the music below).

I have massive stacks of old photos, and I can’t seem to find photographic proof of any of these. It’s a shame, really, because I have fond memories of all of them. My mom really put all of her heart and skill into the costumes she made for us and I wish I had at least one of these originals around to show my kids of what a real costume can (and should) be.

I don’t really think I had her make a costume for me after the Ninja Gaiden one, because by then I was convinced that trick or treating was “kid’s stuff” and I was in a hurry to grow up as fast as possible.

The last costume I can remember her making was a white Marilyn Monroe dress for my second youngest, Dani, and she looked so much like her that it was disturbing. I know I have pictures of it somewhere, but it is buried anywhere inside three PC’s and two external drives. I’ve found that all this digital stuff is actually harder to keep track of than the old film prints. Fuckin’ progress pisses me off again.

Have an awesome Halloween, and in turn, hopefully your costume is equally as awesome.