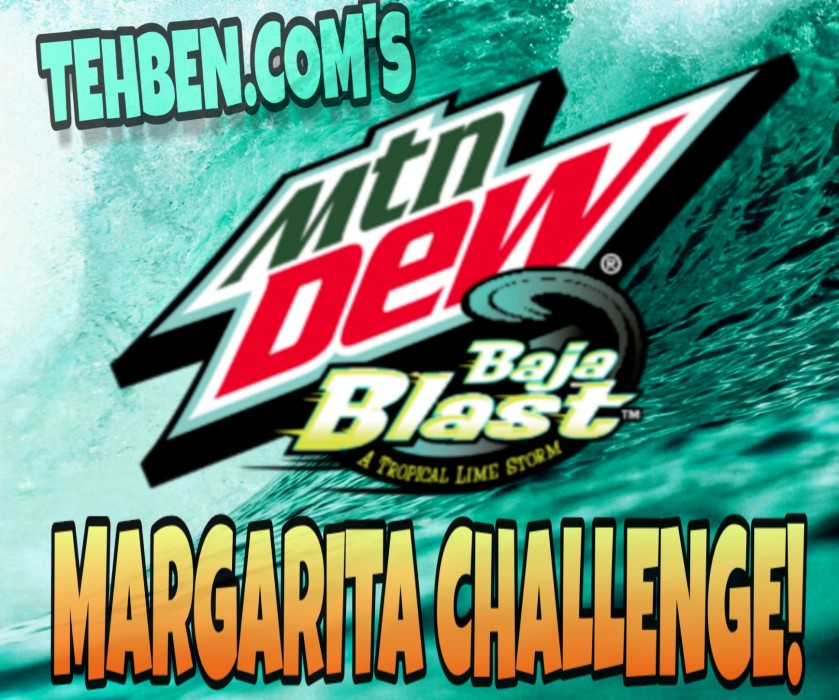 A simple night out with friends eventually turned into a misunderstanding. While Matt was pounding margaritas with his wife and a friend one Wednesday night at the local Mexican joint, he sent a sloppy text to the TehBen writers room. Perhaps we were all drinking a bit that evening as Editor Ben made an interesting non sequitur.

The mission became clear…at least to our diseased minds. Each TehBen writer was to try a different approach and together we would find the perfect margarita recipe using the once again scarce limeish green Mtn Dew.

Nelson Rockingham: Tequila and Blast on the rocks

So I’m a minimalist. I hate clutter, knicknacks, all of it. I don’t have a fancy drink making kit, or all the fancy triple-secs and lime juices, etc. I decided to keep it simple: Baja Blast, and tequila. My first attempt did include a poorly salted rim, but that photo wasn’t the best. Unfortunately, the only way I was able to procure some Baja Blast was to visit my local neighborhood Taco Bell, and got a large cup without any ice. Just to not dilute the Dew any, we’re serious scientists here. When I got home I poured half of a pint glass of Blast on the rocks, followed by one mini-bottle of Jose Cuervo Gold, then the 2nd half of the Baja, then stirred. On the second try, I made sure to get a better picture of the final product, but also chose to test the tequila to Blast balance. I did this by adding another half-mini to the mix.

Verdict: I know Matt likes to comment on color and aesthetic of drinks, but that’s not really my thing. I mean it’s greenish the way Baja Blast is, not like a real margarita but if you squinted maybe? The first one was definitely still sweet, and you could barely taste the tequila. So with a salted rim, the sweet-salty interplay was actually quite nice. On the second attempt, there was definitely a touch too much tequila in this one. The sweet spot is somewhere between, but likely closer to the single bottle mixture. The flavors of the Cuervo and Blast really didn’t play well together, and while I did finish it (‘cause Mama ain’t raise no bitch), I did rinse my mouth a little afterwards.

Margaritas made with sodas seem antithetical to the whole concept. Before you even consider the sweetness, the carbonation alone is enough to screw up the recipe. Taking to the Internet I found a recipe for a “7-Up Margarita” and used it for the base. All the ingredients of the traditional drink are there: tequila, syrup, lime juice, triple sec and a heaping helping of ice. The recipe specifically calls to SHAKE a 1/2 cup of soda in the cocktail mixer. What in the actual fuck?! It’s bad enough I’m ruining a perfectly good 2oz of tequila for this, now I might blow up my house in the process? Well I’m not one to quit, so I gave the mixture a right good shake (over the sink at my wife’s order) and tried to keep the shaker cap from blowing off the top. Poured over a mountain of crushed ice in a salted rim, I left all hope on the table that this would be the answer to our prayers…

Verdict: The Frozen Blast Margarita tastes like absolute dogshit. Like oh my god, this is trash. The extra sugar and blend of real lime with whatever toxic waste Mtn Dew calls “lime flavoring” made this an absolute mess. I even tried a separate attempt without shaking the soda and it was just as bad. This was an absolute disaster and I’m ashamed to have let it cross my lips. Before giving up completely I called an audible: switch to gold tequila like Nelson, and added only triple sec and agave, serving it on the rocks. This one actually works! I danced around the house like Grandpa Joe hearing about the Golden Ticket and urged my wife to give it try. She nearly puked from the taste, but considering the first two would have killed her this was a big big win. I’d sooner die than order one of these at a bar, but thank god we made one we could actually swallow.

I wanted to have at least a kitschy theme for my margarita since this entire idiotic exercise was kinda my idea (sorry y’all!) in the first place. My favorite thing about Baja Blast is the color, which has to be the most perfect color of soda ever created. The greenish blue hue actually looks like refreshing tropical waters slowly lapping across white sandy beaches. A cup of Baja Blast always makes me think of the warm waters of the Caribbean, which is on the opposite coast to Baja, but it’s the thought that counts. Since this instantly reminds me of flailing around in the pristine ocean, frolicking with sharks on the side of our sailboat, I decided to go create a SHARK ATTACK version for both shock value and the biggest chance of getting adopted (read: royalty checks) at a restaurant that specializes in shit like “flair”. I mixed a decent amount of artisinal mid-shelf tequila with some Blast, a full shot of orange cream Svedka vodka (I had no triple sec, so sue me) and some generic grenadine carefully spooned into the ice, with everything topped with a sugar rimmed glass. This drink took some time to make and scores a 12/10 on the diabetes scale, but shit, you gotta admit my photo turned out pretty awesome.

Verdict: While the initial margarita genuinely looked like a heartfelt tribute to being violently murdered on the open ocean, the grenadine eventually dispersed into the drink, turning it a sickly shade of mauve quicker than I had hoped. This drink looks cool for about 5 seconds and then it looks like something that was scooped out of the trench underneath the beer taps at the bar. As far as taste goes….it leaves a bit to be desired as every liquid inside this glass was clashing with each other every step of the way. It makes your mouth feel instantly numb while still being reminiscent of Mtn Dew: Extreme Pickle. I literally had to force it down my throat despite the taste because this was easily 20 bucks worth of ingredients. I poured whatever Blast I had left into the goblet with some tequila and a twist of lime and that shit was actually pretty tasty. Sometimes, simple is just better folks. 1/10

Well, the fellas had all gotten their margarita on by the time I finally got around to making mine. It seemed that both sugar rims and salt rims received mixed reviews, so I wanted to think outside of the box…which is why this beautiful $2 wine glass has been rimmed with some nice green rhinestones instead. It adds a nice feminine touch to my piece…and the fact that the local AC Moore was having a store-closing 70% off sale may have also factored into the design, as well. Actually, I originally had a much more ambitious glass design in mind involving googly eyes and fabric, but the store had sold out of most of the good stuff by the time I got there. I also thought it would be a good idea to go off-book on the margarita and add some Coconut Ciroc to this beast, along with some extra lime juice.

Verdict: I thought the Coconut Ciroc would give this a nice Liberty Brew 50 Flavors Mixed Into One Mountain Dew-Rita vibe, but really it tasted like a muddled mess. It did not mix well with Baja Blast and Jose Cuervo AT ALL. My drink ended up just tasting like flat soda. It wasn’t undrinkable, but I honestly would have been better off just dumping a shooter into my fountain drink and calling it a day.

In short, there’s just no possible way to acquire the perfect Baja Blast themed margarita without spending a weekend in the Taco Bell hotel. While a Baja Blast margarita is nothing more than a beautifully hued pipe dream, this experiment could have yielded more positive results if Baja Blast was more readily available in supermarkets instead of having to make multiple trips through the Taco Bell drive thru. Having to attempt multiple runs to buy more Blast is a definite negative when trying to create multiple alcoholic recipes.

We really toyed with the idea of reporting that “every one of these recipes was a delicious surefire hit!”, but eventually decided against doing that since anybody actually recreating these formulas would be rightfully pissed off. We’d end up with an even angrier comments section, get banned from soda reddit (again) and tehben.com would be branded as a purveyor of FAKE NEWS and only able to flourish through Facebook shares and/or reelection campaigns. Speaking of which…

…you should forward this link to someone via Facebook or Snapchat or whatever the kids these days do! Thanks a million in advance!

The entire team here at tehben.com