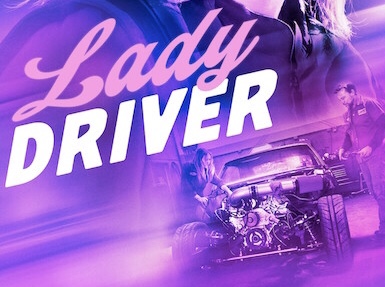 It’s high time we review another film here at TehBen.com, and it’s even HIGHER time since we’ve had a proper racing movie cross our desk. We struggled a lot with the last dirt track racer that we reviewed, but maybe a little less glitz and few lesser known actors will sway today’s film in our favor. Let’s get right to it!

Lady Driver (available on Netflix) tells the story of Elle Lansing (Grace Van Dien). She’s 16, cute as a button, and a complete misfit in her current life living with her mom and impossibly rich stepfather. While attending Monterey’s finest private school, the only class that holds her interest is auto shop and she’s regarded as an outcast to classmates and faculty alike. After securing her drivers license, Elle “borrows” a car and runs away to find out more about herself and learn about her late father. Through sheer happenstance, Elle’s runaway act falls short and her car breaks down near her uncle Tim’s (Sean Patrick Flanery) body shop in Petaluma, California. Events transpire, and Elle takes a summer job at Tim’s garage while slowly learning about the dirt track culture that consumes not only this small town, but her family’s legacy itself.

As with any racing film there’s two distinct factors that have to be considered: story, and the quality of racing content. Let’s start with the story. It’s a well worn method, but Elle’s zero to hero journey is entertaining as her racing ability is distilled from a hidden talent passed down to her by her late father. As you might expect, there was a previously unbeknownst tragedy that essentially broke up Elle’s family before she was even born leading to blah blah blah… it’s time to get back into racing. Starting at the local speedway Elle helps fix up her uncle’s old dirt modified and learns the ins and out of this new racing experience. Elle faces the challenges of her own abilities from being 16 and barely having a drivers license….yet she can’t seem to understand why she isn’t immediately winning in something she thought was so simple. There’s of course a douche bag boy of an antagonist, but most of Elle’s journey involves improving herself not only with her family, but her skills on the track as well.

The racing scenes are plentiful and progress from a local California dirt modified track up to the Lucas Oil Speedway with professional Super Late Models. Quickly jumping back to the story, Elle of course ends up in the “big show” racing the world’s fastest dirt late models, but the path and timeline to which she gets there boggles the mind. It’s almost like a chunk of the story is missing. She’s still 16, barely making hay in a crate engine modified, and suddenly she gets to drive Bobby fucking Pierce’s super late model (sort of)? Let me try to explain. One hundred percent of the late model racing scenes in the movie use stock footage from the Lucas Oil Late Model series, including the cars (in context) driven by the film’s characters, with Elle’s avatar being the famous red #32 driven by Bobby Pierce in the real world. So long as you can suspend your disbelief that a 16 year old kid with one month’s racing experience can suddenly stick it to Scott Bloomquist on the pro tour, this idea actually benefits the film. In most racing films, they have to splice in the “hollywood cars” with some awkward close up shots and have them skating around the track without that true racing sizzle. With this style, the actual racing footage works perfectly, and while Bobby Pierce and Earl Pearson Jr appear to have vanished from existence, the racing action more than makes up for the questionable continuity issues.

Verdict: Lady Driver is a fun and entertaining racing film that knows what it needs to do and doesn’t overstay its welcome with the audience. While the story may not be the most realistic, the characters are wholly identifiable and weave perfectly into a racing family you could enjoy seeing every week at your local speedway. The film takes a unique approach to most racing scenes, employing full use of stock footage rather than pretending to have movie stars drive these machines, making the racing intense and enjoyable…even if you know what’s already going to happen in the previously shot footage. We haven’t quite reached dirt track racing film perfection, but this movie is a fantastic step in the right direction. Maybe Elle’s story could continue for another racing chapter, but I think Bobby Pierce needs his car back first.