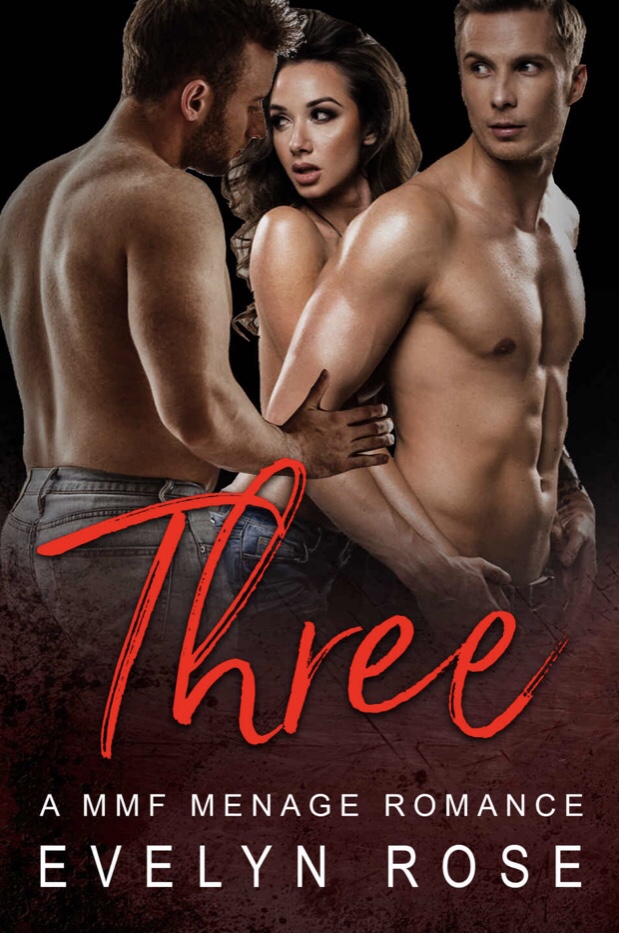 Thankfully, my unfair bias was quickly rebuffed as Evie Rose has penned a surprisingly eloquent novella on a fairly taboo subject. In Three, the story’s lead female, Stevie, is at an unfortunate crossroads: her husband Sam has fallen in love with someone else, a guy who also happens to be their mutual best friend and all around hunk of a man, Damien. Naturally, as smut fans, we’re used to dealing with all manner of character issues and situations, but Stevie has a very unique concern. While she’s heartbroken, she just can’t get her ex-husband out of her mind, nor can she stop thinking about what he might be doing with his new lover, in wonderful graphic detail…

In previous trips to the Smut Vault, we’ve deeply explored the differences between Romance and Erotica. Here’s a quick refresher: Romance tends to take the side of tension and buildup, while Erotica gives us the sex in heaping helpings like the buffet line at Golden Corral. With that distinction in mind, it’s very difficult to consider a short story, particularly one with multiple sex scenes, as fitting the bill for placement in the “Romance” category. While my feelings on the subject haven’t changed, Three presents us with a new interpretation of that rule. Yes, this story is erotica, the sexy content comes early and often, and without apology. But given the eloquence of the author’s words, and the themes and tones of the characters, it becomes Romance in the classical form, not of the modern smutty thinking. Think of the works of Tolstoy to our smutty backdrop: a macro analysis of culture, deep backstories to characters and objects that may only suit to serve the themes of the current chapter, but all laid in front of us to digest between intense kissing and sexually charged encounters. This story comes out almost as condensed, rather than one that’s merely short. An abridged synopsis of a sexual tale, as we see flashes of what something like this could look like across a dozen more chapters.

More to the point, I’d actually like to challenge the author, Evie Rose going forward. As this is their first self-published story, I can understand keeping things short to test the waters…to see if there’s a vibe for your style in a heavily saturated market. However, it feels that Three possibly started out as more long-form idea, one that’s been cut down for practicality’s sake. Certainly not rushed, but more “pared down” than maybe originally intended. I want to know more about the characters of Stevie, Sam, and, Damien…and I don’t just mean the parts where their clothes are coming off. In most short erotic stories, the characters don’t matter, we just want to read about the steamy, messy experiences. In the case of Three, it feels more like we’re being romanced as readers alongside of the characters themselves, and maybe we don’t want the moment to pass too quickly. Whether the answer is a sequel, a second addition, or just something to consider for the next story isn’t for me to say, however I do know that content of this caliber should be analyzed as a Romance tale, in all it’s forms and ideas.
Rating: Three: A MMF Menage Romance is an intelligently written, sexy little story that while not common in the erotic sense, is something deep and rewarding to fully explore. Let’s hope together that the author has some tricks up their sleeve to keep this style of writing alive, and to see if there’s a way to flesh it out a little more so we all can enjoy it even longer.