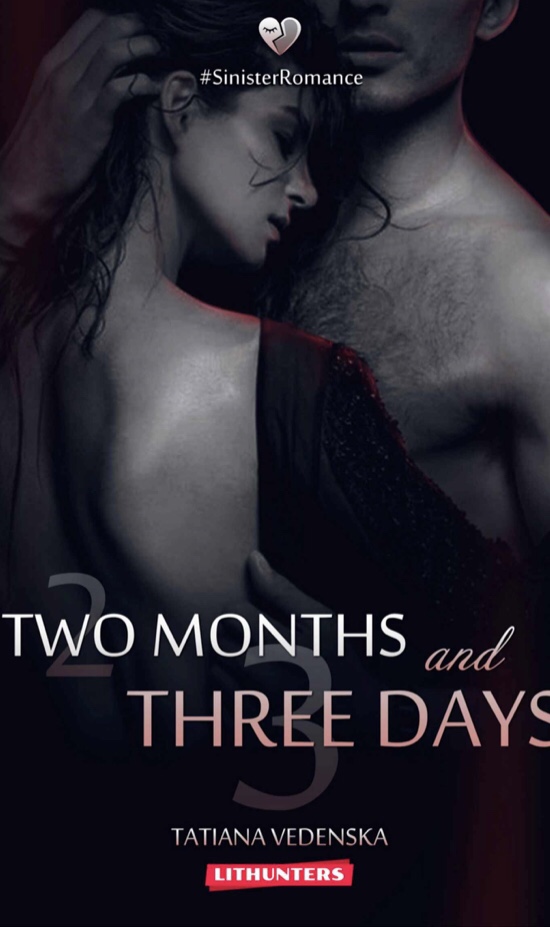 Two Months and Three Days by Tatiana Vedenska is the first in a series of #SinisterRomance novels featuring the dark romantic escapades of a crazy rich/crazy handsome photographer and his newest muse. His obsession centers around Arina, a simple girl from the Russian farmlands who is attending veterinary school in Moscow. While her roommate is um…exploring her own sexuality at home with yet another partner, Arina takes to the streets instead to kill some time and preserve her dignity. After wandering into an art gallery, Arina happens to arrive at nearly the same time as a famously misunderstood photographer named Maxim Korshun. Despite never having heard of him, Arina is instantly captivated not only by the art, but by the man himself. His photos evoke uncomfortable emotions inside of Arina, and due to the happenstance of the situation, suddenly the famous artist takes this opportunity to confront the vulnerable Arina about her feelings regarding his life’s work.

The pacing, despite the considerable length of the novel is comfortable and builds up the tension quite well. The reader will have a good understanding of Arina, if not of the more mysterious Maxim, including details about what might attract these two to each other. After the initial encounter, something about this young Russian girl piques Maxim’s interests. The man who could seemingly have any woman he wants, abruptly just wants Arina. After tracking her down, Maxim makes a unique proposal, and of course compels Arina to acquiesce. Arina is the quintessential lamb being led to the slaughter. Maxim promises a summer she’ll never forget, traveling the world with him as her “personal assistant.” The one catch, Arina will have to submit to Maxim in ways she couldn’t possibly yet understand.

At this point you might be finding your sharpest pitchfork and lighting your favorite torch, because this plot sounds hella familiar to 50 Shades of Grey. For one thing, you’d be right. The novel’s marketing openly compares itself to the infamous erotica, but that actually does Two Months and Three Days a bit of a disservice. Sure the checklist is there: rich guy with baggage, pretty but unassuming girl, sex laden contracts, inexplicable love fantasy…it’s all in there. However, the attention to detail is what separates this story from its inspiration. An all-seeing narrator tells the story, rather than solely the strange inner-workings on one of the main characters. Maxim has base and carnal desires, but they’re all believable in their own right. Arina is a cocktail of emotions as both Maxim’s plaything and lover. And within this conflict, comes the novel’s finest hour.

A trope that’s become commonplace in erotic lit is the notion that the submissive lead (typically the female love interest in hetero stories) will eventually conform to all the desires and needs of her lover(s). Let me humor you with a couple classic examples. “Oh she didn’t like anal at the start? Well now she’s everything butt.” “Two partners at the same time? Well I never…..OMG this is my life now,” you get the idea. Two Months and Three days came this close…THIS CLOSE (I’m doing the index finger/thumb thing to show how close it is) to being another in a long line of romantic stories that break and conform the main submissive character to the dom’s self-interests. After a globe trotting voyage of rough sex, questionable “artistic” photography, and a sickening micromanagement style from Maxim that would make Steve Jobs blush, the final brick was setting to be laid. Sparing spoilers, Maxim’s attempt to complete the circle of ownership-domination to Arina seemed all but inevitable. In generalities, it addressed the subject of permanent dom/slave ownership. Just at the mere prospect, I was ready to throw down the e-reader in disgust, and my editorializing between paragraphs was starting to piss off my wife. But suddenly, the clouds part, and the reader is treated to a REAL ending. It’s only the first of a series, but I’m frankly fine with this being the head-canon ending for my personal experience. I’ll try not to extrapolate on this any further for the sake of the novel, but the ending alone makes this a story worth being read.

Verdict: Two Months and Three Days by Tatiana Vedenska is a venerable journey through the psyche of a powerful man and assumed submissive woman against the interesting globe-trotting settings of Moscow, Berlin, and London. The basic outline of the story is well-worn, but intensely satisfying. Sizzling sexual content and an engaging outer story keep pages turning during the more predictable mid-novel moments. Once you get over the slight learning curve of a story that’s been translated not only but language but by culture, you’ll be ready to sign on the dotted line for this hot-to-the-touch #sinisterromance.

A special thanks to LitHunters for supplying the review copy of Two Months and Three Days for our review. All thoughts and opinions are my own.
Purchase Link: Amazon
Author’s Twitter: @TatianaVedenska