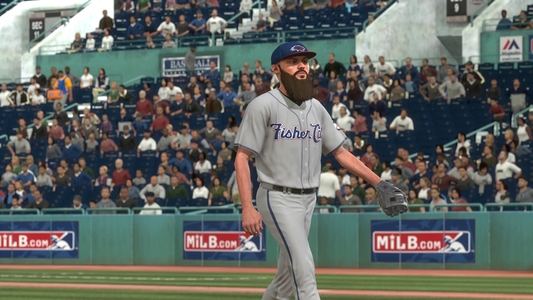 In our previous episode of Life Without a Fastball, Zippy Dachemlow finally felt the roar of the crowd and got those first game jitters out of the way. In impressive fashion, Zippy has already disrupted the Double A minor league baseball world. As the New Hampshire Fisher Cats continue their 2018 campaign, the coaching staff has a few things to review with our stringy hero…

In MLB The Show 18, the player attribute spending mechanic of years past has instead been converted into a “training regimen” system. With this change, every week or so you now direct your created player to either: slightly increase an attribute, or expand its maximum cap through various training drills. For the purposes of Zippy’s progression, we will NEVER increase a pitch’s velocity, and will always look to increase a pitch’s “break” whenever possible. After making his screwball just a little more nasty, the manager wants some office time with his new phenom. After only a handful of starts, it’s apparently Zippy’s time to leave the starting rotation and take a turn at a Late Reliever role. While his manager states this would make him more versatile, Zippy can’t quite understand what’s happening, and tries to rebuff this proposal.

Another little quirk of this year’s Road to the Show mode is the requirement of each created player to play a secondary position during their first season.  In the case of Zippy,  any starting pitcher would be required to do a bit of bullpen work. As Zippy has only studied the baseball history of the Deadball era, he still has no idea what he’s getting into. But rather than fail his government’s mission, he begrudgingly agrees to briefly become the Fisher Cats’ Closer.

If you, like Zippy, are unfamiliar with intermediate baseball strategy, let’s talk about what you’d look for in a good Closing Pitcher. Generally speaking, a good Closer should have one “killer” pitch that can get every type of batter out. More often than not, this pitch would need to carry a lot of velocity that’s blasted out over a short amount of time, usually over the course of the 9th inning. As an example, one of the best closers in baseball today is Aroldis Chapman of the New York Yankees. When on his game, Chapman can throw an eye-popping 105 mph fastball, and is one of baseball’s most intimidating pitchers. Yeah, so maybe Zippy’s manager didn’t think this strategy out, but that’s just something the rest of the Fisher Cats are going to have to deal with.

One bright spot to consider is that closers rarely look to throw out of the strike zone. Chiefly, they’re trying to make batters swing and miss as quickly as possible. Zippy hates to throw outside the zone, mostly because he CAN’T. Even when I try to make him paint the edges, the screwballs and forkballs float majestically into the corner, forcing many called 3rd strikes. Using this strategy, Zippy has accidentally become the perfect Closing Pitcher. Nine easy breaking balls and Zippy can shut the door for the home team. He powers through Save after Save, striking out 2 or 3 batters each time. Zippy has managed to harness the control of Rollie Fingers and has combined it with the velocity of his grandmother. Somehow, this is working!

Just as with his boyhood on the USS Jimmy Carter, nothing in Zippy’s world allows him to get comfortable. Just as soon as he’s taking a shine to the new role for the team, his manager puts him right back in the Starting Rotation. With this new experience behind him, the Fisher Cats look towards winning the division.

More interestingly, early voting numbers point to Zippy possibly being elected to the All-Star team. Will Zippy settle back into his position and lead the Cats to the promised land? Let’s give him some space and check in a little later in the season, the next time on “Life Without a Fastball!”

Follow Matt on Twitter before he starts sobbing about Manny Machado for the rest of the season.