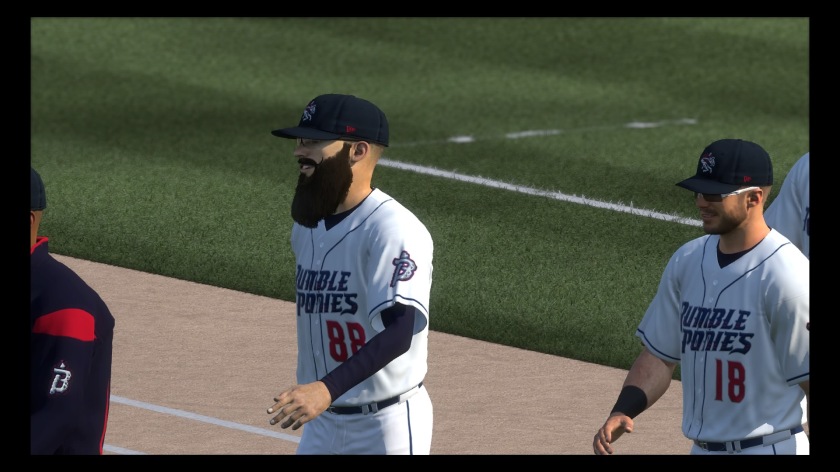 After the 2018 baseball season, lanky lad and all around baseball genius Zippy DaChemlow retired back to the confines of the USS Jimmy Carter deciding that living adrift at sea was better than playing for the Toronto Blue Jays. Thinking his baseball days were behind him, he threw his glove away and settled back into oceanic obscurity. But in 2020, with life itself becoming so uncertain, the gods of America’s pastime have called this misunderstood gentle giant back into the game…

MLB The Show 2020 is back in the TehBen video game library after a year’s absence as the updates to the Road to The Show career mode over the last two games have intrigued us to get Zippy back in the fray. A brief recap: Zippy DaChemlow is a 6’10” 180 lb Starting Pitcher that doesn’t know how to throw a fastball. Zippy’s pitching style employs the more obscure (and most importantly) slow pitches available. No matter what, Zippy will never purposely add attribute points to pitch velocity, and will avoid the baseball status quo where ever possible. Thanks to an obscure rule for “At-Sea” players, Zippy is compelled to participate in the RTTS Scouting process all over again.

Zippy hasn’t forgotten everything about baseball, but there’s certainly some rust to knock off. He had about ten minutes to remember his pitch arsenal and throwing motion before scouting, so our lanky hero quickly selected his trusty Screwball along with a Sweeping Curve while adding a new 3rd pitch, the Knuckleball. A couple of the old scouts recognize this unforgettable prodigy, and immediately throw their clipboards in utter disgust as he delivers the first pitch.

29 out of 30 organizations couldn’t be bothered to make a claim for Zippy on draft day, but one particular team couldn’t waste a chance at another crazy gimmick. In what probably felt like the 714379389th round of the amateur draft, Zippy finally received the call.

Zippy wasn’t going to be fooled this go-round, now as a man who’s going to take his job seriously. The good name of the Binghamton Rumble Ponies wasn’t going to be squandered, and the future Big Apple Ace took to training in the new RTTS mini games. Beginning his career 5th in the AA rotation, Zippy has his work cut out for him facing the best of the Eastern League bats with some unique faces that we’ll be excited to challenge with the Friends/Rivals features of the mode. We’ll be playing this on dynamic difficulty, so as Zippy struggles, we’ll be able to commiserate and adjust right alongside him. There’s some that will say a beanpole with grade III rickets has no business taking part in professional baseball. To that we simply say…check the high inside corner, Zippy just changed your life with a backwards K.

Follow Matt on Twitter for more horrible baseball analysis and hopeless obsession with his beloved Orioles. Also check back with TehBen.com as Zippy continues his quest to bring his style up to the major league level!