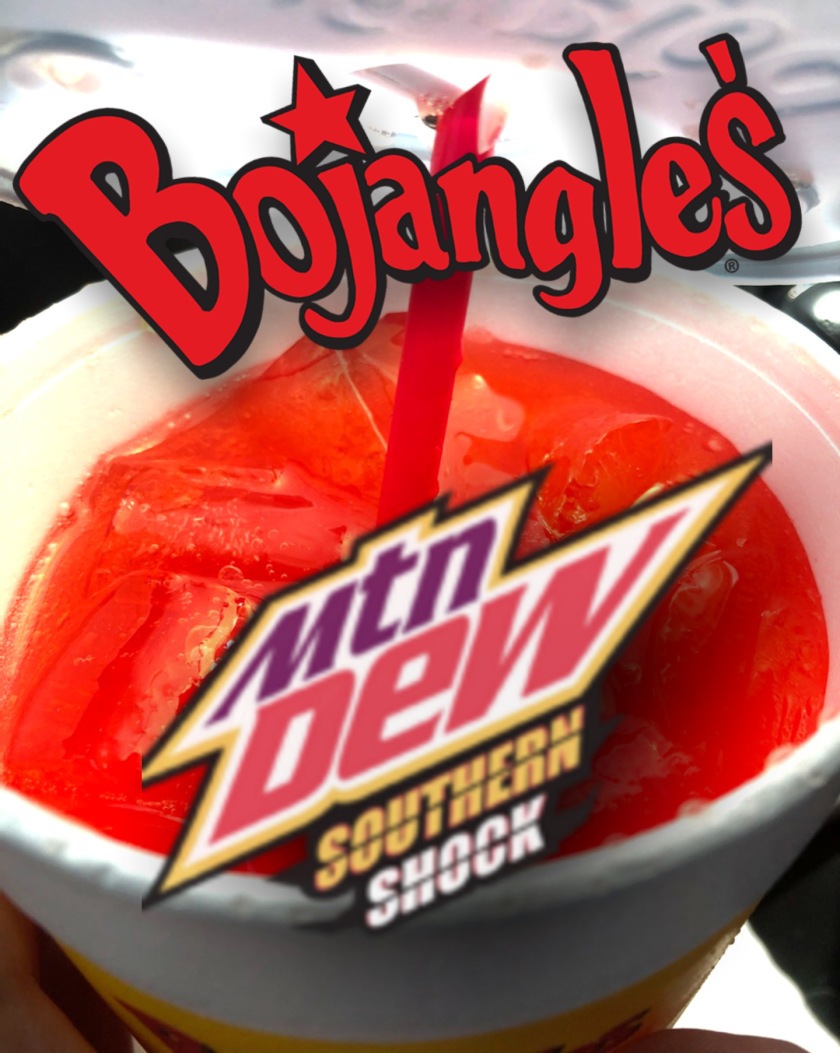 One of the things that make the greatest of all sodas, Mtn Dew, all the more better is the constant work the Dew Team puts in to create and release new flavors. One of the most frustrating things about that same company is how they drive scarcity and exclusivity when releasing some of those prized and unique soda concoctions. While a Wal-Mart or Taco Bell Dew exclusive Dew might still be accessible for most consumers, some of their recent exclusive releases have denied access to a great deal of national soda lovers. I’m not going to argue against this bold marketing tactic, I’m just saying that it sucks. When I heard about Mtn Dew Southern Shock, some of that frustration boiled to the surface.

Southern Shock was released in June as an exclusive fountain drink to the Bojangles chain of restaurants. If you’re unfamiliar, Bojangles is a fast food chicken n’ biscuits experience with locations mostly in, obviously, the South of the United States. This soda blogger is located in the state of Maryland, so access to the new Dew was going to be a challenge. I hadn’t thought much of it, dismissing my chance to try it as unlikely, until my uncle reminded me that there was a Bojangles about an hour south of me on the Eastern Shore of Virginia. There’s a lot to experience in that little corner of the world, and after talking it over with my wife we decided to load up our Akita puppy for her first real car trip and go on a little adventure.

The trip down south to this part of Virginia has always been special to me. Whether it’s the quiet countryside, the decaying buildings showing the generational past of the peninsula, or just the insanely cheap prices on cigarettes, I tend to get very reflective on this journey. As we head down south this time however, I’m finally seeing this region slowly confront and accept progression. The old confederate flag emblazoned curio store “Dixieland” now has its sign completely covered with a “God Bless America” XL bedsheet. The rising taxes have condensed the smoke outlets, and the land is being ever so slowly invaded by more affluent housing developments trying to find the next real estate boom. I’m not much of an adventurer, but this little voyage counts as my Blue Highways experience, witness to the changing of society on America’s roadways. I could wax poetic about the spirit of the road or whatever but there’s some Stuckey’s Pecan Logs to buy and new Mtn Dew to throw down. After a social distance appropriate purchase of chicken biscuits, fries and large Southern Shocks it was time to see if this little migration to the tip of Dixie was worth the time and effort.

I hadn’t done much research on what the flavor was supposed to be, so I was riding in blind. The look and smell were something of a toss up between fruit punch and a strong smelling syrup…like cough syrup but not in a wholly unpleasant way. Overall, I was a bit lost in the moment to be able to objectively convey what my senses were telling me. As I said earlier, there’s very little opportunity to visit a Bojangles and with this Covid pandemic and so much stuff going on in the world it was refreshing to be doing something so utterly meaningless that the moment mirrored itself as the most important thing going on in the immediate universe. The French Fry seasoning, the biscuit style, the whole meal was holding serious weight on the future of our society. My wife had already resigned her displeasure to the flavor, so I had 64 ounces to suddenly play with. The iced down taste was….well it was quite nice to be honest. I’d have to guess that this was intended to be a fruit punch soda of sorts. If so, I’ll be brief: it’s the best fruit punch soda ever made. Granted, that’s not the highest hurdle to clear as most of its competition resides on the bargain shelf at the grocery store, but the carbonation mixed with the punchy flavor was a home-run all the way. The taste matches well with the meal, but you could probably have said that about any soda or tea off their menu. For 14 dollars my wife and I were completely full with fries left over, and I had some delicious soda remaining for the long ride home.

Verdict: Mtn Dew Southern Shock is a triumph of the human spirit…if one’s only mission in life was to make a palatable fruit punch soda option. This is an exclusive fountain soda that I’d give the full recommendation for a complete bottle and can campaign. While such ideas are probably aligned to whimsy and fantasy, perhaps they’ll at least keep it around to have with those famous Bojangles fries for years to come. If Baja Blast is destined to be forever married to Taco Bell, then let’s give Southern Shock and Bojangles a chance to tie the knot as well.