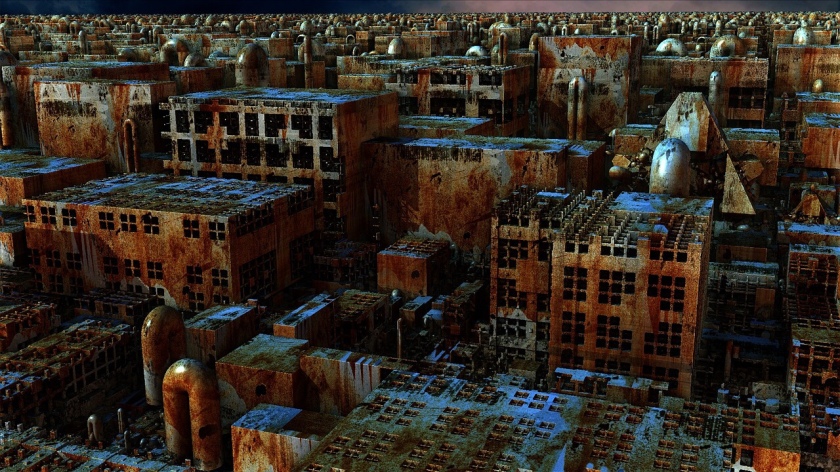 Let’s talk about… the future! The “not too distant future” brand of fiction has a special place in my heart, as a look at the near future to which we might end up becoming is wildly fascinating to me. Before we reach the era portrayed in The Jetson’s, we still have to grind through the whatever this weird “late capitalism” time is that we’re unfortunate enough to be stuck in for the first half of this 21st Century. Today’s Book Club selection is a realistic look at what we’re probably going to deal with in a few more years of intense social media worship and worldwide politics led by caricatures of incompetent buffoonery. Until Max Headroom saves us all from world domination, today’s story might set the blueprint for what’s soon to come. Catch the wave, it’s TehBen’s Book Club!

Neon Empire by Drew Minh is at its core an intimate depiction of a dystopian future set some six or so years in the future from our present day. Social media has not only consumed all of our leisure time, but now entire infrastructures are being built on the backs of “likes,” “shares,” and brand inspired live streaming. The purpose built community of Eutopia was constructed brick by brick in the American West to be a scale model of Europe’s finest features. Eutopia has it’s own Eiffel Tower, Roman Colosseum, and various other pristinely rebuilt landmarks, with all the modern personalized marketing and advertisements to match. Due to political unrest in the actual Europe, Eutopia was created solely for social media influencers to vacation, explore, and of course share their mischievous doings to a hungry, media consuming public. Purse snatching, sexy scandals, and dramatic car chases are the daily activities for the fame obsessed members of the so-called “transactional” generation of the mid 2020s. It doesn’t take a clairvoyant to see this coming: but there’s been some trouble with the execution of this attention whore Gomorrah. Following a hacktivist motivated terrorist attack at the city’s version of The Louvre, key people in and around the city are looking for answers. Can this paradise of vice and brand recognition survive beyond the whims of a smart phone swipe? Neon Empire follows nearly a dozen characters to bring the reader every angle of this techno den of debauchery.

The most obvious take away from the novel is to give credit to the author’s skill in world building. The city of Eutopia leaps off the page in equal parts fascination and irksome frustration. It’s inherently believable that our 2019 social media consumption could lead to a corporate engineered haven of personalized marketing and data mining that would send Zuckerberg’s robot brain into a GPU sparking logic-break loop. Recognizable possibility hits home in multiple layers as the author uses real world people as background characters. To be honest, it’s a bit unsettling to read about potential sex scandals involving present day minors like Barron Trump or Shiloh Jolie-Pitt…but perhaps what makes me most uncomfortable is that we can all see it coming. The fictional characters however, are a bit harder to keep up with. The story throws what feels like dozens of characters at you with massive exposition dumps to plot development. Influencers, corporate stakeholders, tech industry goons, and those looking to blow the lid off the whole damn thing switch POVs across the novel’s two parts as Eutopia churns atop its shaky ground. It’s a bit ironic to have all these busy moving parts, because when the chips are down, the city is the only true character that seems to matter. The existential elements that populate the story’s climax are harder to swallow than it should be as the near constant character development led me into the false sense of a grand finale that never quite came to fruition. The true artistry of this commentary on modern human existence will likely be lost on a large number of readers, and I was a unfortunate casualty of that decision. Should this universe ever cross my path again in a re-read, or in the highly likely event of a sequel, I’ll make sure to be more prepared for it’s elucidation on the fragility of human life.

Verdict: Neon Empire by Drew Minh is a fantastic idea and setting that brings the modern day issue of social media engorgement into a WestWorld style interpretation. The human challenges, criminal activity, or simple sex appeal of the whole experience is a fear inspiring look at what we might become if we succumb to the power of our handheld devices. It’s important to remember that the city of Eutopia is the most important character, and those that inhabit it are mere cogs inside its delicate infrastructure. While the existential commentary may be difficult to accept for some readers, the artistic attempt to produce it deserves a fair level of praise. I certainly hope this isn’t the last we hear from this novel’s universe, as it is sure to become more relevant with each passing day.

Special Thanks to Meg Eden and California Coldblood Books for providing an advance review copy of Neon Empire to TehBen.com. All thoughts and opinions are my own.
Author’s Twitter: @drewminh
Publisher’s Twitter: @CalifColdblood
Pre-Order/Purchase Link: Amazon Release Date September 17th, 2019