Yeah, I know. I’ve been on a Mega Man kick lately, but it all stems from buying a PS4 so I could play 30 year old games on my giant HDTV. The Mega Man Legacy Collection is a must-buy for anyone who grew up with the Blue Bomber and hated that fucking dragon with every fiber of their being. You can play as much of the game as you want, quit whenever , and then pick right back up from the second you left off. Great stuff, even though they run the emulation true to the NES capability, and having more than 4 sprites on the screen causes the same slowdowns and lag that the originals had.

This was a staple topic of a recent Middle Age Middle School podcast that you should totally check out!

So, on this kick I spent a Saturday looking around at garage sales. I found a couple nice motorcycles and various crap that would look great when placed upon my other piles of crap. The only deal I went through with was finding a full face motorcycle helmet which I managed to talk the owner down to ten dollars. I always wanted to paint a custom helmet to match my bike, and I bought it knowing I would go through with the process someday in the distant future.

And that’s when I kicked off my YouTube channel and needed stuff to fix. So this project came to fruition rather quickly than I had anticipated. If you are lazy and/or suck at reading, here’s the final cut of the video. I loved making this video.

In the video, I tear through most of the processes really quick, but I did pause in between steps to take nice photos (for Twitter) of the process that you don’t get a great look at in the video. The whole process took around 25+ hours of labor and I managed to condense all that into a ten minute short.

Consider this your “DVD Extras”.

So this was the starting point. A Canadian GMax G08 full-face helmet. It was in near-new shape, but the nappy red and black tribal shit had to go. I took most of the clear coat and paint off with 280 grit sandpaper, which still got gummed up from all the crap. I then polished it with 400 and 600 grit once all the bullshit was gone.

After sanding for what seemed like an eternity with the soundtrack to Spice World on an infinite loop in the background, I laid down a primer coat or two, followed by an initial mask. Everyone loves to point at me and talk shit about how I did this backwards, but this made the most sense to me to get true color to come through. Haters gon’ hate. 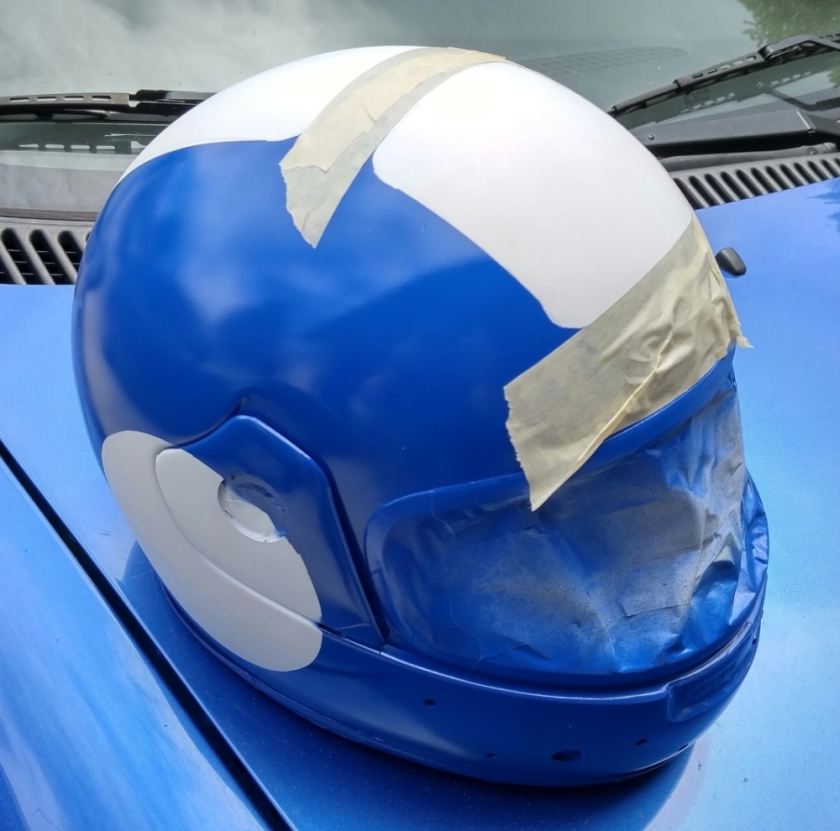 The dark blue base coat looked so good. At this point, I was one part unstoppable, and two parts terrified of completely fucking it up after such a good start. 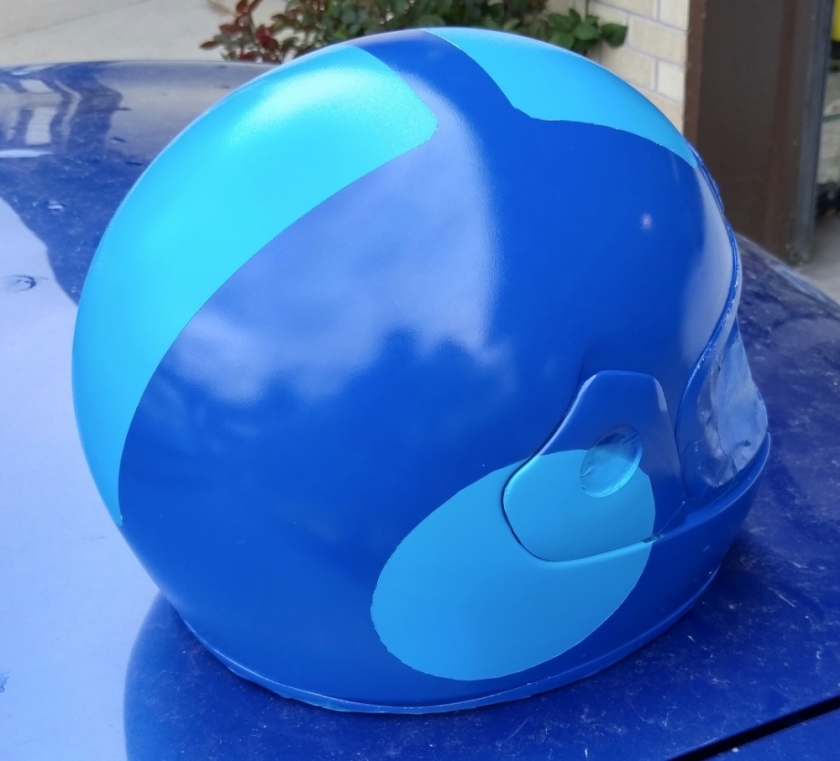 After the second color was laid down it looked even better. I was happy that everything I saw in my head was going together exactly as planned. I don’t know if you’ve ever seen any of my paintings, but I tend to have great ideas, but the end result always looks like it would barely win a participation ribbon in a 2nd grade art show. 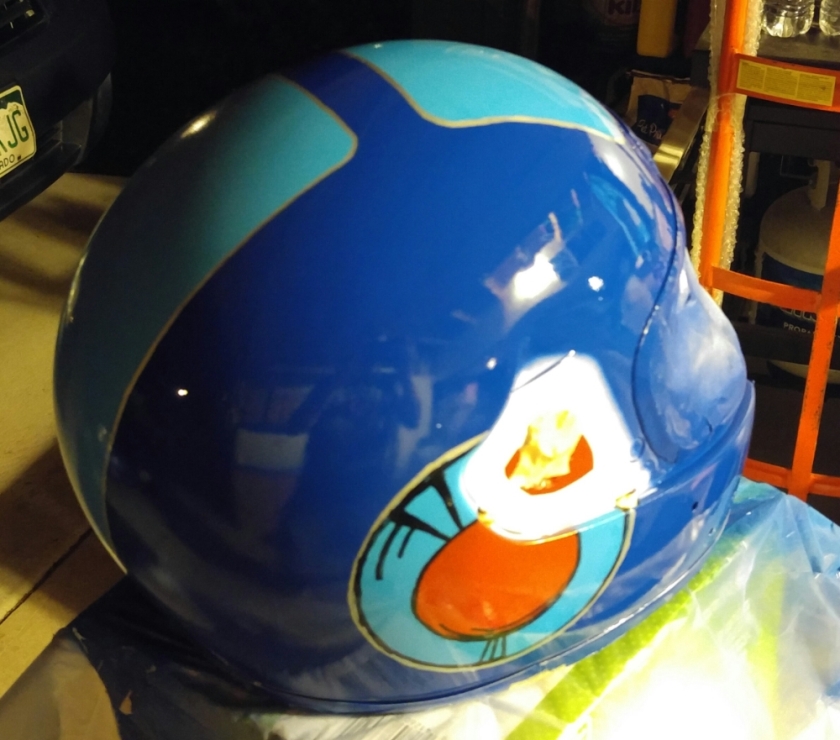 I painted the red interiors and the details with paint pens and was happy with the final result, so I put down several layers of clear coat that were so shiny, you could see reflections in it without a light source behind it! 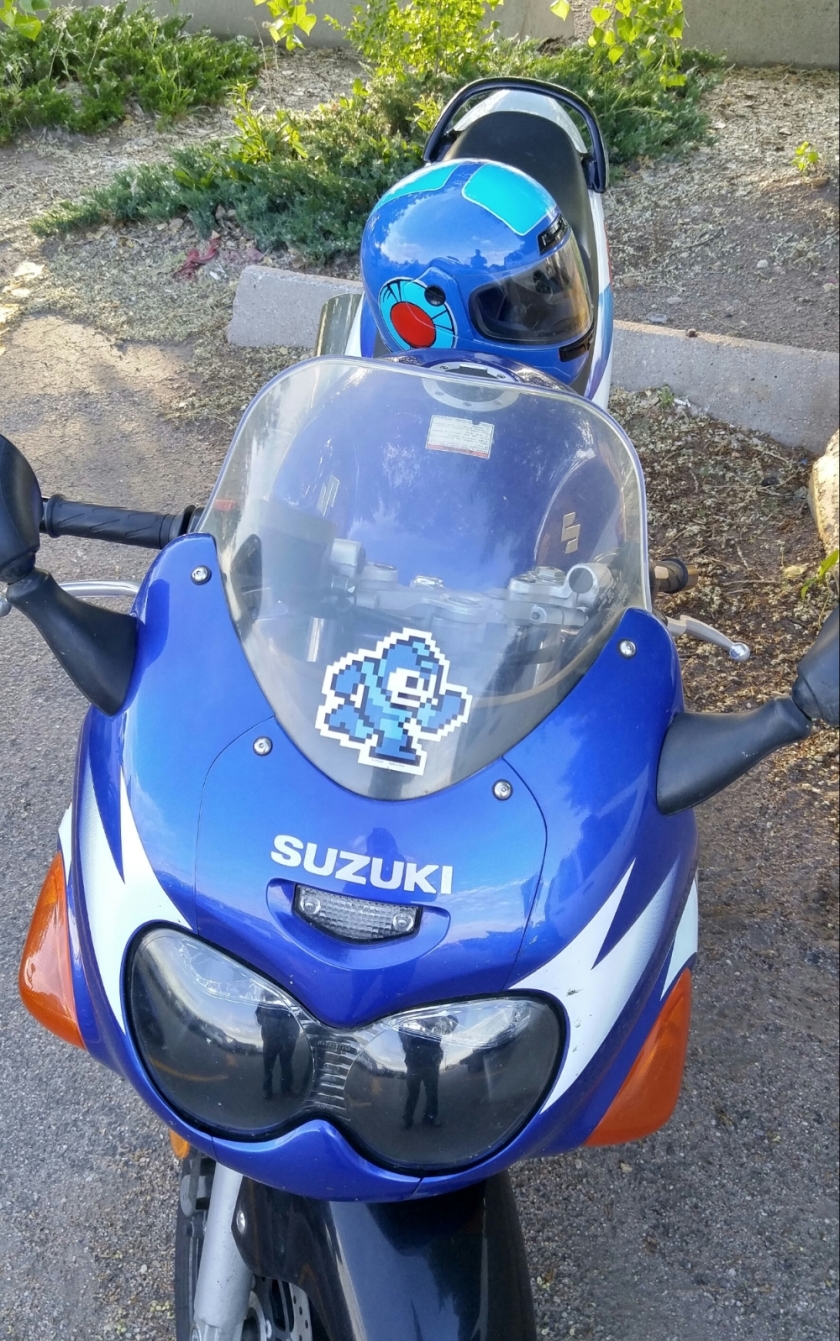 Here’s a photo of it in action. If you look closely, you can see about 40 different reflections of me in the lights, paint, reflectors and helmet. It looks like a painting by M.C. Escher after discovering MDMA.

And lastly, a still from me posing for the cover of Mega Man 1. I tried really hard to replicate the stance and distorted dimensions, but one can only make that “I’m So Deathly Constipated” face for so long without losing appreciation for graphical accuracy.