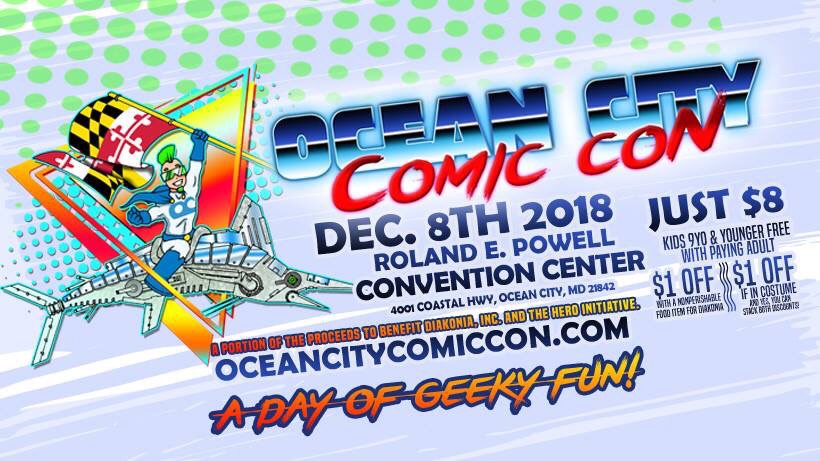 On December 8th, 2018, I took the one final leap of faith into becoming a full-fledged “nerd.” At long last, I attended my first Comic Con. Naturally, this is only a significant milestone to me, and me alone, but I thought I would share this intimate experience with all of you. Fan conventions are popular, world-renowned, and are proven to help business, artists, and more importantly fans connect intimately with each other on any given number of nerdy subjects. Without much direction or expectation of what my first convention experience would entail, the best option was to keep a mental journal and reflect  upon my experiences after all was said and done. Armed with only a handful of business cards and fair amount of moxie, we set sail for Ocean City, Maryland. Accompanied by my dear friend Shawn, we crept as far east as our ramshackle Ford Focus would take us, eventually throwing anchor at the Roland E. Powell Convention Center for Ocean City Comic Con!

Going into this, I purposefully did almost no research on what guests, vendors, or displays would be in attendance, in order to take in the sights and sounds at face value. On the main floor of the “Artist’s Alley”, we took our initial laps maze-ing around the various authors, artists, cosplay groups and featured displays. These featured displays that dotted the edge of the floor were a good vantage point to asses the scene and people-watch. Outside of a convention setting, people watching is a fond pastime of mine, and while I’d highly suggest partaking in that sort of thing at a fan convention, it’s important to remember that “cosplay is not consent,” and to make sure you’re not making anyone uncomfortable. Anyway, after settling in to the initial impressions of the convention, it was finally time for our first panel of the day.

Heading up to the 2nd floor of the convention center Shawn and I consulted our handy Con program to choose a panel to attend. One subject that interested us was “Cosplay: A Community” hosted by Kati Coe Cosplay. Walking passed the Anime Theater room we took our seats next door in the professionally set up ballroom and waited for the speaker to arrive. Making quite the entrance, Ms. Coe, who we identified downstairs by her unique “Belle from Beauty and The Beast” costume, gave us her background and insight into the world of cosplay. The message of her panel was to paint cosplay in an inclusive light, which at face value I fully appreciated. As an outsider, cosplay can tend to look too “cliquey” to some people, and there’s some unspoken resentment towards people who aren’t “doing it the right way.” While it’s true that anything in which you personally hold value in should be appreciated, I was left to wonder where the line between “hobbyist” and “hardcore enthusiast” would begin to blur. Perhaps that would be a discussion for another time, as we concluded and would head back to the main floor for another go ’round.

Back down the escalator we went, and it was finally time to start actually talking to people. -shudders- I’m not quite the extrovert in person that’d I’d like to be, and being a fish out of water at an event of this size made the leap a bit more significant. Thankfully, I was pleasantly surprised by the number of authors that were in attendance. For some reason, I can talk about books with anyone, and we met some really cool people around the floor. Meg Eden and Lynn Almengor had a fantastic booth, and might serve as my entry point into reviewing young(er) adult literature. However, my personal favorite of the floor was Cameron Alexander’s “Dark Corps” book series. Something about stuffed animals acting like superheros really works for me. After some lovely discussion, it was time to attend our final panel of the day.

Entry 4: The Definition of “Geek”

To wrap up our day, we decided to take in one last panel, and a particular subject intrigued us. The Definition of “Geek” hosted by the multi-versed entertainment group “Loading Snacks” was a surprisingly well thought out discussion on the culture of nerd/geek entering the mainstream. (“Loading Snacks” by the way, is apparently a term for junk food that you can eat while holding a controller, a very important nomenclature). The “crew” consisted of four self-admitted geeks who each had their particular viewpoints on what the lifestyle meant to them. Throughout this panel, something I’ve been thinking for a while came into focus. Nerd culture is indeed mainstream now. A Spiderman t-shirt isn’t something that’s inherently unique to your personality anymore. Anyone that’s been to a movie theater or a Wal-Mart in the last decade is likely to own at least three.  But despite nerdy things being so popular, there is still a “defensive crouch” among nerds and geeks to remain as an outsider to the normies of the mainstream world. Mainstream means even the jocks and the divas are going to get to be a part of this, and I wonder just how prepared some of the most hardcore enthusiasts are going to be. This was the sort of thing I was hoping for when attending my first convention. Having a candid discussion 20 feet away from a room playing Anime non-stop, surrounded by superheros, graphic novel characters, and a kick-ass Captain Picard. This was the moment when I realized I was getting my money’s worth. (Also a special thought for the audience guest talking about their experiences with radio broadcasts during the 1950s. The “theater of the mind” discussion was a pleasant surprise).

Overall, I’m glad I finally made the leap. While maybe not a full convert to the craziness of con-life, I’m thinking the Ocean City Comic Con could be a nice yearly destination for my inner geek to let loose. Thank you to all the guests, panelists, and vendors that made giving up my fancon v-card a rewarding and entertaining experience.

Follow Matt on Twitter for more self-discovery, including which Powerpuff Girl will best make for his first Cosplay.