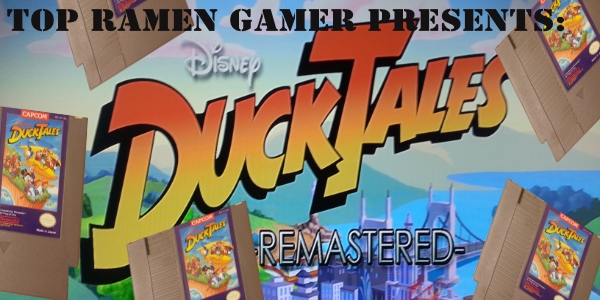 Well, if you came here hoping to read a review of Grand Theft Auto V, you are out of luck because I can’t get a copy just yet since I’ve already reached my allotted amount of plasma donation for the week.  This is a review of DuckTales: Remastered, a game that not only lends itself to deep-seated nostalgia, but also comes with a price tag that is Top Ramen Gamer approved.

DuckTales was an old 80’s cartoon that was made by Disney and was a refreshing alternative to the old sweatshop created stuff that Filmation was constantly crapping out through the whole decade.  As a show featuring the antics of Scrooge McDuck and his Diff’rent Strokes-esque family, it was likely targeted to a younger audience than myself at the time, but the Indiana Jones spin on it made it a guilty pleasure of mine.  The first few episodes were all about the world’s richest duck raiding ancient Incan tombs and traveling the globe digging up treasures and ancient mysteries, but as they ran this idea into the ground, they focused more and more on repetitive episodes trying to determine the genetic background of the butler.

I started to lose interest in this cartoon over time, but in 1989, Capcom released an 8-bit title based on the show for the NES.  It was pretty good.  Ok, it was really good.  Good to the point that I still have a copy of the game sitting on my entertainment center right now.  It was a side-scrolling adventure game that allowed you to swing a cane at objects and use the cane as a pogo stick to jump around and smash enemies.  It sounds like a stupid and helmet-worthy idea in this day and age, but back in the golden days of Nintendo, this was actually refreshing and different.  The graphics were good, the main goal -treasure hunting was the priority, and the music was simply fantastic.  I still think the soundtrack from the moon stage was the best composed music on the NES.

This game is a direct translation of the NES version. Every bit of it remains true to the original, but in beautifully rendered HD graphics.  The level designs are the exact same, the enemies and frequency of them remains the same, and even the methods to defeating the bosses are intact.  They just look prettier, bigger, and don’t do that annoying flicker shit when there are too many sprites on the screen at one time.   Here is a quick breakdown of the pros and the cons of this $14.99 re-imagining of our childhoods (“Childhood” applies only if you are in my age group).

The graphics are absolutely amazing, while still holding true to the gameplay of the original.  The movement animations are mostly the same, but cleaned up and more fluid.  Most of the action noises lift the original soundbites from the NES game like Scrooge getting killed, climbing ropes and jumping.  It’s like the version we saw as children in our heads when the graphics were still a long ways away from not looking like a backseat covered in ice-cream throw-up.

While all the levels are represented correctly from Ye Olde Days, they went and added a little bit of added incentive with the extra mission goal that drives the story and the game.  It’s not invasive or too far out of scope to be just obnoxious filler, but adds just a little more dimension to the NES version of “run as fast possible to the boss” that we’ve all been conditioned to do. I just did not care much for the side mission of trying to piece together a missing carburetor that was eaten by rabbits.  You know how long it takes for a rabbit to pass a float valve?  Too long.

They have also added in a tutorial level, which is a nice gesture, but redundant seeing as anyone purchasing this game already learned all the moves back in the 80’s.  They should have made it an optional level as Scrooge only has two actions: 1) Hit shit with a cane and 2) Hop around killing shit with a cane.  But they did add a completely new level at the end for the final showdown with Count Chocula which was really cool.  The NES version just had you go back to Transylvania and hop in a mirror to initiate the final boss fight.   The HD addition of the last level “Scrooge Goes to Hell” was definitely a fantastic climax to the game.

The music is still really good, and they kept all of the original tracks intact for the most part, but glossed the shit out of them.  The moon stage is done well until it changes key instead of repeating on a loop like the original.  The rest of them sound really good as well, except for the occasional butt-rock guitar solo cheese straight from Dynasty Warriors.

The gameplay is A BALLS-OUT NINTENDO GAME. If you were hoping for anything else, you will be disappointed.  Even the enemies’ programmed behavior is the same.  They regenerate constantly, and even regenerate to only fall directly into a bottomless fucking pit, just like the original.  I have to give mad props for sticking this close to the original programming, most developers would have not allowed the Punching Robot Duck to fall repeatedly to its untimely death, but these Wayforward guys are keepin’ it real like Dr. Dre.

All of the original supporting cast is still here.  All the other characters that help Scrooge along the way are here and voiced by the original voices from the cartoon.  There’s Robocop-Knockoff Duck, that creepy maid duck and Bubba Gump Duck.

The Not As Good Stuffs:

1)I don’t know if I have a crappy copy or something, but my DuckTales experience has been soured by some of the strangest and irritating programming bugs.  Every time I play, I am logged out of XboxLive (which I think was planned to reduce my own personal embarrassment from my online friends seeing what I’m playing) and that’s “only the tip”, as Ron Jeremy once said.

2) I cannot earn any achievements from the game no matter what I do, despite playing through completely in easy, normal, and hard mode.  I can’t even see what the achievement details are, I just get the Microsoft swirly loading thing on the screen.

3) I was skipping a cutscene and it froze completely while it was flashing the “DO NOT TURN OFF, GAME IS SAVING!” message which completely corrupted my data.  Be wary of skipping the cutscenes, or it might decide to give you the finger and fuck your shit up.  I have heard that the original NES music is unlockable after a playthrough, but I never got to experience it since this game got a repeated  hard-on from deleting my save file after I finished a playing through the thing in one sitting.

4) I’m not sure if this was intended, but the game does not save a damn thing except for the extras you buy as in-game rewards.  I can play a level or two, but if I turn it off and try to go back later and continue where I left off, I have to start from scratch from the unskippable tutorial level.  This thing has to be played start to finish in one shot, which may be a nod to its Nintendo roots, but in reality is a terrible feature in this Candy Crush world.

I hoped with all of my being that it had Instant Retro Mode like Monkey Island.  No matter how many times you hit the “back” button, it won’t switch back to the crappy 8-bit version.

While the cutscenes had the voices done right, after watching them once, they became the scourge of the universe.  One can only sit through a ten minute conversation with static characters so many times.  It goes into talking mode almost constantly and interferes with the flow of the game.

The last level, while being an awesome representation of hell, with a really cool boss fight that alludes to Galaga is becomes damn impossible during the escape part of the level.  There’s so many critical jumps that are really hard to gauge while the screen jars around and the controller vibrates so hard and infrequently that it will screw you up every time until you turn it off completely.  It’s so frustrating that it will drive you to drinking straight paint thinner.

So, do I recommend this game for fifteen bucks?  I certainly do.  As long as you don’t care about achievements and can have a couple hour long stretch to burn, it’s fantastic.  My four year old daughter was put off by the difficulty of this game, but I found it to be mostly comparable to the original.  If this was a game that existed before your time, I don’t know if you will exactly “get it” as it is an amazing remake of a classic. Although I am hopeful for more remakes like this, I’m not sure if this trend will continue, as this is a niche market for sure, as most of that held sweaty NES controllers nervously for hours at a time are reaching retirement age.  All I can hope is that someday they will make a HD remake of the greatest Nintendo game ever made, Taboo: The Sixth Sense.