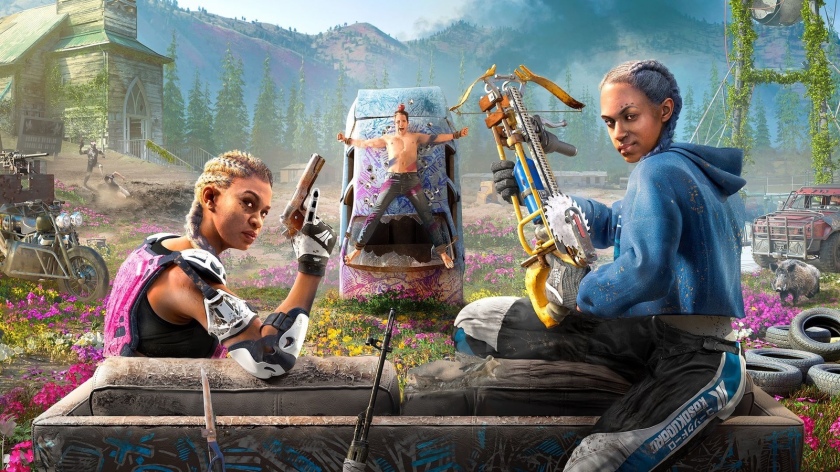 February 19, 2019 mjburroughs ARTICLES, NERDIES, TEHBEN REVIEWS!, video games Leave a comment
Spoiler Warning: The following review will contain minimal story-related spoilers to Far Cry: New Dawn, however this review will contain MAJOR spoilers for its predecessor, Far Cry 5.
***
On Friday (2/15), Ubisoft released the follow-up to its 2018 smash hit Far Cry 5, entitled Far Cry New Dawn. With a unique $40 price tag and mixed feelings from the gaming community going into release, I was curious to see how this game would balance the “expansion pack” vibe with the duty of providing an entirely new experience. So how does this brave new world stack up? Let’s head back to the boondocks of rural Montana and find out the answer for ourselves.

To make one thing perfectly clear from the get-go, the ending to Far Cry 5 was bullshit. Quick refresher: religious cult leader Joseph Seed and his family of brainwashing psychopaths took over the beautiful land of Hope County, Montana. Using a tried and true mixture of drugged crops and religious fervor, the cult was sparing nothing in their supposed preparation for the “end of the world.” Just as your player character is about to bring the evil zealot to justice, a massive nuclear explosion erupts onscreen and the world seems to end exactly as the fucker predicted. Joseph Seed somehow retires (with your character as a captive) inside a fallout bunker to live out the apocalypse, now that his prophecy had unfortunately been fulfilled. Far Cry New Dawn picks up “post bombs,” with a setting officially 17 years into the future from the end of Far Cry 5. Unlike most nuclear war based games (like the Fallout series), Hope County appears to have thrived with more color than a Disney cartoon during the handful of years in which human life was hiding underground.

This abundantly colorful, slightly cheery experience is actually a welcome addition to this sort of video game. Though some of the animals have unique radiation-ized variants, it’s refreshing to gaze on the wildlife without seeing any three headed deer or Geiger counter bouncing fuzz monsters. The story set to this lovely backdrop however, barely acknowledges the new-world-wasteland atmosphere, with people being just as shitty to each other as usual…

For New Dawn, you play as a Captain in some sort of “re-build it” task force that travels across the country restoring civilization. Working in what comes off as a heavy-handed mirror to your heroic group of good eggs are the Highwaymen: a Mad-Max style group of baddies that also cross what’s left of the United States acting like raiders. Heading the Hope County chapter of the baddies are twin sisters Mickey and Lou. The pair within a vacuum do a good job in their “I AM THE FAR CRY BAD GUY” dynamic, however this brand of villain is growing tired. Ubisoft is doing a lot of commendable work into diversifying the background and appearance of villains and characters alike, however the actions of said villains have continued the trend of being one dimensional. If you’ve played any of the last handful of Far Cry games you know what’s coming: bad guys crossing your player’s path multiple times with non-interactive cutscenes doing reprehensible shit while laughing, and of course that makes you hate them. The concept is tired, and it’s time for a change. A more welcome familiarity however, are the characters that are fighting on your side. More than a couple companions and resistance fighters from the Far Cry 5 story make a return, and their progression in the last two decades make for some genuine reflection if you’ve invested yourself in the last game. Interestingly, your first companion is a direct descendant of a family you assisted in last time around, born the very day that the bombs fell.

One conflict I have, and perhaps the game shares this conflict with me, is the sense of realism. At the start of New Dawn I found the proceedings to be more realistic than the plot of the last game. With all of that drugged out “Bliss” business regarding the Seed family I did a lot of teeth grinding over what was being presented as a distinctly human and definitively American story. It’s amazing to actually say this, but the core story of New Dawn, despite its nuclear war setting is a far more realistic experience than its predecessor. Gritty but believable assholes fighting for resources with the vestiges of the old world in a crumbling landscape made more sense than a baker’s dozen worth of drug trips and hour-long Televangelist villain monologues. This realism is of course quickly derailed whenever the Seed cult comes back into play. As was noted in the trailer the peggies are still around, and still nutty. I won’t spoil anything major, but as soon as his folks come back into the picture, the player gets the chance to engage in some super human activities. For being so tough and real in the first half of the game, it’s a tough pill to swallow that the developers couldn’t hang on to it for the duration. Still, double jumps and high speed combat can’t be sneezed at too much…but I’ll stop there for now. 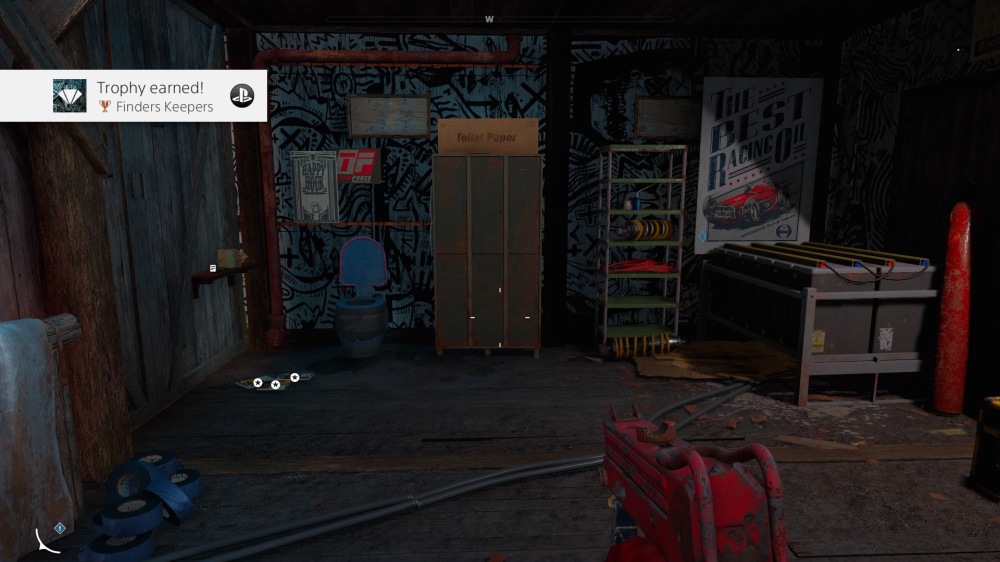 Overall the feel and gameplay of New Dawn is familiar, but with a touch of design difference to reflect the change in scenery. Money is indeed worthless, so the economy is based solely on scrap parts and components, which are used to craft the needs of humanity. Vehicles operate exactly the same, but have an appropriate level of rust and grime to suit the setting of not having access to a local Grease Monkey for the last 17 years. The real “post war” atmosphere really comes from the weapons. While all the guns from the last game are present, new weapons crafted through a combination of junk components and eccentric genius invite the player to explore new combat styles. Shooting a saw blade rifle then sending in my tanky warthog animal companion to finish the job is the perfect blend of fps combat and crazy-ass fun that make all of the side content worth playing. At the $40 price tag, there are significantly less missions and variety quests, but there is still a fair amount to be gained from exploring and leveling up. This leveling up by the way, is now more predictable. Missions, weapons, quests and even adversaries are now all given distinct “levels” between 1, 2, or 3. With certain missions and items acting as a precautionary gate of difficulty, New Dawn is a much more linear experience which generally suited me fine. Players that like to buck authority and make their own story however will be met with unintended challenges in this system.

Verdict: Far Cry New Dawn is an enjoyable experience, properly engaging the players looking for a more satisfying ending to Far Cry 5. Despite the corner cutting typical of an economically priced title, the story, quests, and atmosphere give a new and welcome alternative to the post apocalypse. It’s not a perfect game, but after the head scratcher that’s been Fallout 76, there’s a new clubhouse leader for a post war interpretation of America. And frankly, I’m here for it.